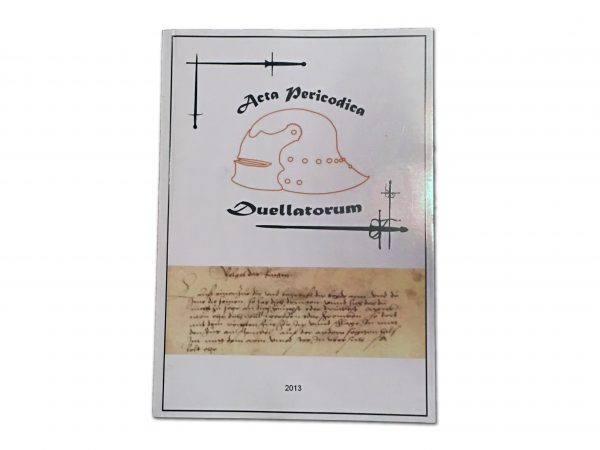 Acta Periodica Duellatorum is an annual publication aimed specifically towards the HEMA audience. This publication is compiled of both scholastic and practical theory based articles submitted by professional and amateur authors and held to the same rigors of academia. For fencer’s interested in keeping abreast of the latest research or digging deeper into a wide variety of topics this is a must-have book each year.

This 2013 edition contains the following articles:

-HEMA in the map of science (Mátyás Miskolczi PhD)

-A Kampfschwert from the 15th century – a reinterpretation of the so-called “Teutonic estoc” from the Princes Czartoryski Collection in Crakow, Poland. (Maciej Talaga)

-Bayonet Fencing: An overview of historiography and techniques for French footmen during World War I. (Julien Garry)

-The true edge: a comparison between self-defense fighting from German ‘fight-books’ (Fechtbücher) and the reality of judicial sources [1400-1550] (Pierre-Henry Bas)

Each book is numbered as these are a limited edition publication every year.